We have live monitoring on a number of our district's rivers, for up-to-date river level information

Consent holders who take water from a river have specific conditions on their consents that relate to river flows. These conditions are linked to current river flows as measured and monitored by Council. This is done to ensure water is only taken when there's enough water in the rivers to use.

For information on river low flows

The Gisborne district contains the headwaters of 4 major rivers that flow into other regions.

The Hangaroa River flows south into Hawke’s Bay. The Motu, Waioeka and Waikura rivers flow into the Bay of Plenty.

The north-flowing rivers are clear, fast-flowing and highly regarded for their recreational value of fishing, canoeing and white-water rafting.

It covers 216,484 ha and has formed the fertile and highly productive Poverty Bay Flats on the edge of Gisborne city.

Some of the subcatchments are particularly susceptible to soil erosion, notably in the Waingaromia and Mangatu areas.

As a result, the bed in the lower reaches of the catchment is building up due to sediment and gravel deposition.

The Poverty Bay Flats and the city are protected by the stopbanks of the Waipaoa River Flood Control Scheme but since their construction 60 years ago, flood capacity has been lost and the scheme is being upgraded again at substantial cost.

Annual suspended sediment load for the Waipaoa catchment is 15 million tonnes or 33.54 cubic metres per second. This amount of sediment enters Poverty Bay.

Despite the high sediment loads of the lower reaches of the Waipaoa catchment many of the tributaries in the headwaters provide habitat for a range of indigenous fish species. These species rely on migration up the river system as juveniles and return to the sea as adults.

Eels are one example in the fishery that requires this ability to migrate.

Trout are present in the Wharekopae tributary. They have been introduced and are not known to migrate.

The Waipaoa River is the main source of surface water for irrigation on the Poverty Bay Flats and the major recharge source for aquifers.

The Waikohu River is one of 5 main tributaries of the Waipaoa River which is the main source of surface water for irrigation on the Poverty Bay Flats.

Prior to 2001 the Waikohu River had largely been an untapped water resource, other than for permitted takes, and there was no water strategy or allocation plan in place for this river.

Currently there are 5 irrigation takes and one small scale hydro-power diversion.

The Maraetaha River is a meandering river with the river channel comprising of pools and riffles.

The river is known to be saline from the river’s mouth up to the Maraetaha state highway No.1 bridge.

The Te Arai River, located to the south-east of Gisborne, is also a tributary of the Waipaoa and has a catchment of approximately 18,900 hectares.

The upper catchment of 1,050 hectares is in native bush and is managed by Council as the catchment for the main water supply to Gisborne city.

The river then flows through steeper pastoral land and out to lowland plains.

The Te Arai River flows into the Waipaoa River approximately 4.5km upstream of the river mouth.

The lower Waipaoa and the lower reaches of the Te Arai experience tidal effects and associated water quality.

There are 12 water permits including one for frost protection.

The Taruheru River flows through a highly modified environment which includes horticultural and agricultural land and residential properties. 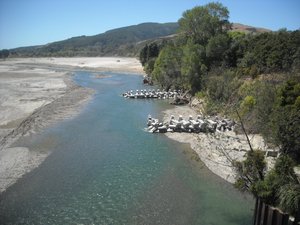 The Waiapu River is formed with the joining of the Mata River, which flows north-east from the Raukumara Ranges, with the Tapuaeroa River near Ruatoria township.

The Waiapu is perhaps the most famous river in our region from a perspective of pre-European history.

Its name is found in Tahiti and it offered a protected region where people could settle and find safety in times of war. The river valley is referred to in a tribal saying: “Hoake tāua ki Waiapu ki tātara e maru ana.” In English this means “Let us shelter under the thick matted cloak of Waiapu.” (source www.teara.govt.nz)

Further inland, the Waitohaia River flows into the Mata River.

The Waiapu River has a catchment of 173,400 hectares, much of which is very prone to erosion.

Much progress has been made over the past 40 years in planting the eroding areas and encouraging native scrub reversion, but the Waiapu remains the most sediment laden river in the district.

The annual suspended sediment load is 36 million tonnes, this equates to 90.47 cubic metres of sediment flowing out to sea per second.

The eroding gravels are rapidly raising the bed of the river in the lower reaches, causing riverbank erosion that is threatening Ruatoria township.

A number of bridges over tributaries have been raised in recent years in response to rising riverbeds. The river catchment is mostly covered in native bush (more than 80%) with the remaining area covered in scrub and coastal forest.

The Ngati Porou deed of settlement recognises the significance of the Waiapu River to Ngati Porou.

The Crown formed a Waiapu River Catchment Erosion Assessment Project Steering Committee with representatives from Ministry of Primary Industries, Department of Conservation, Ministry for Environment, Ngati Porou and Council. The committee commissioned an independent assessment of the size and scope of issues impacting on erosion in the catchment.

The study, by Crown Research Institute Scion, confirmed that the rates of natural erosion and sedimentation are high in the Waiapu catchment and afforestation, where it has been applied, is a most effective method of controlling erosion.

An independent study of the erosion issues in the Waiapu catchment has confirmed that erosion in the catchment is of spiritual, cultural, and economic significance to Ngāti Porou.

The study, undertaken by Crown Research Institute Scion, confirms that the rates of natural erosion and sedimentation are high in the Waiapu catchment and afforestation, where it has been applied, is a most effective method of controlling erosion.

The Crown, Ngāti Porou, and the Gisborne District Council are committed to addressing erosion on the East Coast. The East Coast Forestry Project and other government funded schemes will continue to support erosion control measures in the Waiapu catchment.

Ned Ihaka, a member of the Te Haeata, (Ngati Porou Negotiators) and now of Te Runanganui o Ngāti Porou, welcomed the report, especially the recognition that this long term problem will require a long term commitment and engagement with the Iwi Kaenga (local people).

Mike Jebson, Director Resource Policy Ministry for Primary Industries, says the report confirms that afforestation, reversion and wide-spaced planted trees are very effective in reducing erosion. About 54,000 hectares of land in the East Coast have been treated to date. This included 39,000 hectares of the worst eroding land, of which a significant proportion in the Waiapu catchment, under the East Coast Forestry Project. An area of about 28,000 ha of grassland within the catchment still requires work to prevent sediment yields from increasing.

Gisborne District Council says that it will continue its work through the implementation of its regional planning rules and will provide advocacy and advice services. The Council is also willing to provide further leadership.

The Waiapu River Catchment Study was commissioned as part of the 2010 Ngāti Porou Deed of Settlement to assess the scope of the erosion problem in the Waiapu River catchment and compile a list of the research and intervention methods applied in the past.

The area of land to the east of the Raukumara Ranges contains 2 main catchments the Waipaoa and Waiapu, but smaller coastal catchments include the Awatere and Uawa.

The geology of the Gisborne region is complex but generally comprises sedimentary sandstone and mudstone geology in the upper catchments of the Waipaoa and Waiapu River catchments.

Hillside erosion, slips and river aggradation are common in the East Coast region, the Waipaoa and Waiapu Rivers are examples of aggrading rivers.